Aria is 9 1/2 weeks old. She’s been on outings with both Rudra and I, but none with just me. You ask how is that even possible two months into this right? Well luckily we had the holiday season around right when she was born with family around and Rudra having some time off, I didn’t really need to get out of the house with her since there were people around to watch her while I ran errands or got some sanity at Target/grocery store. Yes, those are literally the two places I’ve frequented the most in the last two months. Otherwise, my shopping is mainly done online nowadays: Amazon. LOVE IT. Especially now that I have prime. I’m positive our wallets are thinner because we upgraded. EPIC FAIL.

Anyhow, now that January is in full swing, and it’s just me and the little one at the house, I knew I needed to get out by myself with her. A thousand thoughts run through my mind as I plan this one menial trip to the mall. “What if she has a shriek fest? What if I get poop all over myself and her? What if things get so out of hand and I can’t get it under control in the comfort of my own home?” Now, I know experienced mothers will scoff, and maybe new mothers will empathize but all I know is that I was stressed. I also know that many moms were out and about with their newborns within days of coming home from the hospital (kudos to you guys), but I wasn’t one of them. I always had reasons (or excuses, call it what you will) to not do it: The weather…the germs…Aria hasn’t had her shots yet…It’s flu season…and the list goes on and on, but I digress.

Today, the weather was in the high sixties and I decided today was the day. I had been cooped up in the house all week, and felt like a prisoner in my own home with my baby and my pump. My only outing had been to the doctor’s office to get her two month shots. Enough right? I didn’t want to be bald by the time the weekend was over because I had pulled all my hair out from going mad.

So after her 11 o’clock feeding (which took forever since she was being fussy), I got all her stuff ready. It was noon. She was playing and I knew if I sat her in the carseat, it was going to be even tougher to get out of the house calmly. So I slowly rocked her to sleep, gently set her in the carseat, and got myself ready. By the time I finally backed out of the garage, it was 12:59 PM. Two hours had gone by and I felt like nothing was accomplished. She feeds every three hours which meant that at 2 PM things could potentially go downhill and I could regret this whole thing. 2 PM was in an hour…was this worth it? Should I really leave? I decided yes. So 10 minutes later I was parking in front of Macy’s and Aria was already awake, but I was impressed with how well she was doing. We walked into the mall and perused Baby Gap and Crazy 8. Everything was still good. I decided to brave going into one of my stores and test the waters of trying something on. It was 1:45ish and she was starting to make those tiny fussy sounds she tends to make right before she’s hungry. Uh Oh right? I knew she was tired since she had barely napped. So I picked her up and put her in the Baby Bjorn to see if I could get her to fall asleep so I could continue to browse. Yes, I was bouncing inside the store with a baby on my chest while trying to decide which shirts were going to look the cutest on me, but I still felt good. People would glance over and smile (god only knows what they must have been thinking!) as I continued to bounce to the Bruno Mars that was playing, but 15 minutes later she was asleep! I quickly gathered all my shirts and went into the dressing room, put her back down into the stroller, and started to try on the clothes. I think two minutes had gone by when this lady in the next stall was on her phone super loud, and of course woke my peaceful Aria. Now, I know this is wrong and selfish and obviously not this lady’s fault but I wanted to punch her. Yes, I just said that out loud.
Being around 2:15, Aria was not a happy camper. I had made it this far…I was not going to leave without trying on these damn shirts even if it meant having a screaming baby. I don’t think I’ve ever tried on clothes that fast by the way. Got in line to pay as her frustrations were getting stronger. You’d think I would’ve given up but everytime I thought about it, I just kept saying to myself “you’ve made it this far”. The lady at the cashier of course wanted to chit chat and take her time, and all I wanted to do was pay and get the hell outta there. As I was swiping my card and pushing the stroller back and forth to calm her down with my face bright red, another employee came up to me and said “Oh, I thought I heard a little cry! I knew it had to be an infant! You can barely hear her!.. Wait til’ she’s older and throws a tantrum!” It finally hit me: no one could really hear her but me. NOBODY CARED. It was a revelation. Her sweet infant cry really wasn’t that loud given I was in a mall with loud, blaring music and older kids being much more rowdy. DUH.

Either way, I speed walked back to my car as she continued to wail. Yes I could’ve stopped and given her the bottle I had packed but I was over it. I just wanted to go home and feed her there. Started driving and she calmed down and put herself to sleep, probably from the hysteria of crying. So I got even more gutsy and decided that while she was knocked out, I would go through a Starbucks drive-through to try their new caramel flan latte. Again, I had come this far…what’s a few more minutes before going home. Got my latte and pulled into my driveway at 3:01 PM. Went inside and fed her and all was back to normal.

Verdict:
I was out for a measly two hours…was the whole thing worth it? HELL YES. I got out… saw people versus the ones on TV…bought two new shirts and got a coffee I’d been wanting to try. I’m going to call that a success. Not sure how many mothers out there right now are laughing because this whole event was literally the most humdrum story they’ve ever heard, but all I know is that, I won’t be nearly as stressed the next time I step out of my house with her now that I’ve done it. And that’s all that matters to me. I also realized that no one even cares about what is happening when she cries and it’s all in my head. And to all the mothers who may be in the same boat and are scared, trust me, you will be fine.

A couple of pictures to commemorate the day: 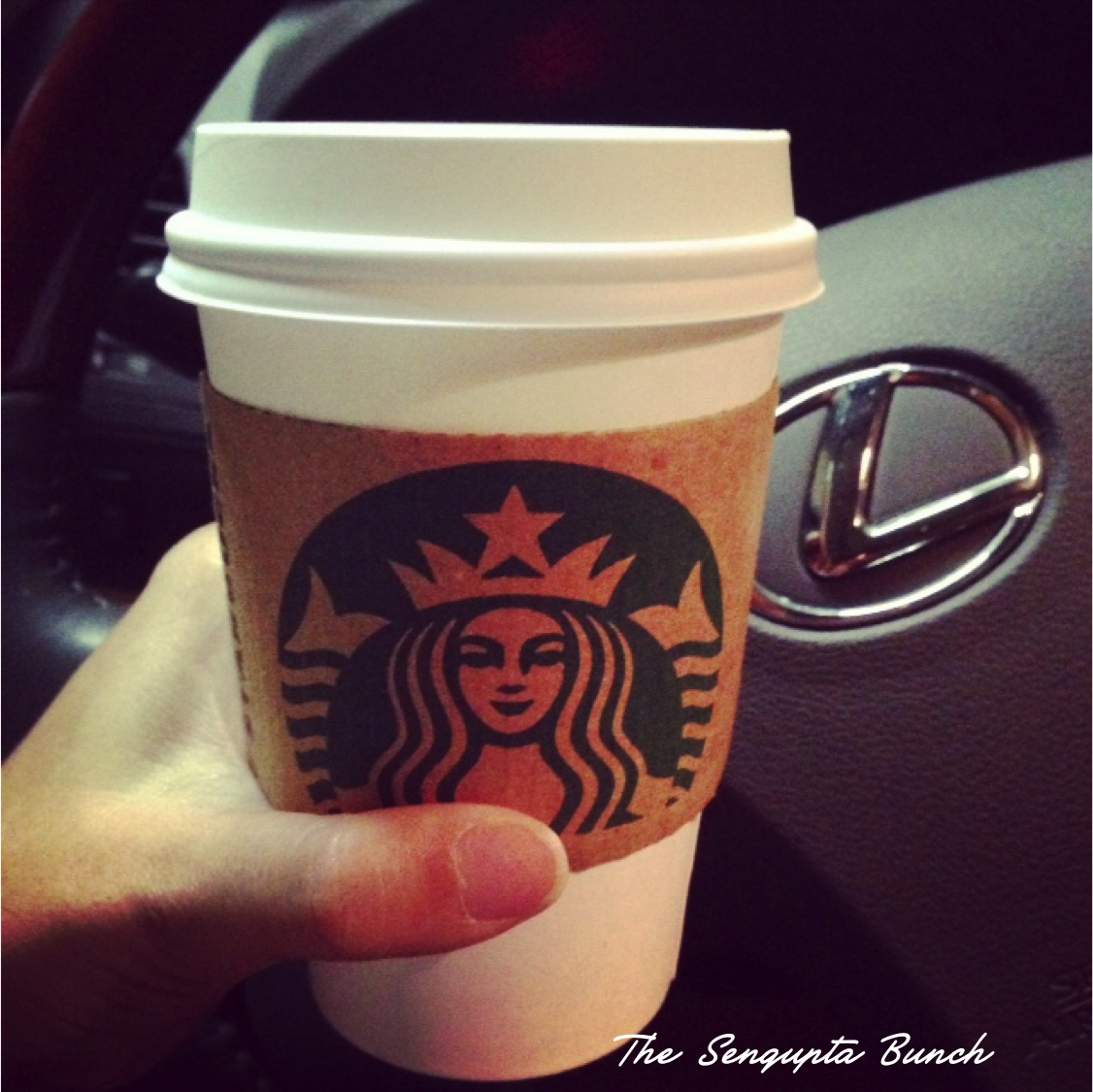 But seriously, I hope my second outing with her is better and that it gets easier. =)