From the minute Aria was born, the first thing we mastered was the swaddle which was taught so well by our amazing night nurse at the hospital. Aria absolutely loved it. She couldn’t really sleep in any other way so we knew that this was our survival method for getting through those first few weeks when you’re literally in that crazy, survival mode phase. She slept like this for naps during the day, and at night. We even tried putting her to sleep without it, but she would just always wake herself up by moving her arms around and startling herself.

Then, we came to know about this amazing thing that made the swaddling process even simpler. (I could never master the technique only using the Aden+Anais blankets..my husband is like a pro at it…if it were a sport, he would be taking home the gold.) Anyhow, we loved our miracle blanket. IT IS AMAZING. Highly recommend it for anyone who is considering the swaddle technique and make their lives easier! We had the manila one that is picture on the far right. 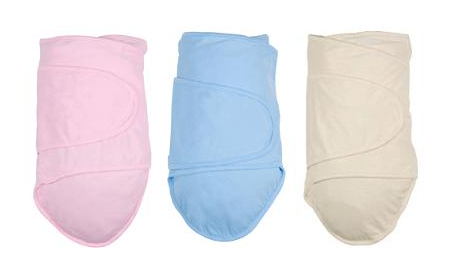 A couple of months went by and we were still swaddling. Every time we would go for a doctor’s checkup, the doc would ask if she was still swaddled and we would say yes, with our heads down in shame because we were so chicken of breaking this habit. I mean, c’mon, if you are getting sleep at night, would you mess with the system to make your life miserable?

Anyhow, we finally got to the six-month mark and the doctor was like “ok guys, you need to break free of this thing.” I was scared shitless. What did this mean? How was I gonna get anything done if she never slept? How was she ever going to not wake herself up by not being in this contraption? I was scared. Worried. Nervous. And about 10 other synonyms of that nature.

I started looking online for transitions from swaddle to no swaddle and came across another great product, called the Baby Merlin Magic Sleepsuit. This suit was basically a heavier suit that would slow down her startling movements at night so she wouldn’t wake herself that easily. It was amazing! Not to mention, she looked like this adorable marshmallow in it! We had the yellow one in the middle! 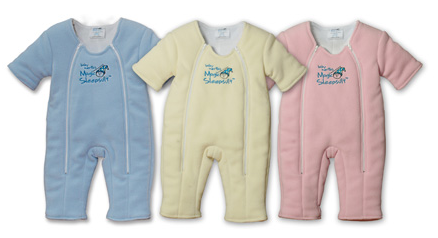 Finally at the 8 month mark, we were able to fully transition her over to no swaddle! It has been amazing and the entire process has been relatively simple. Yes, it took more time but I was ok with it given how comfortable she was with it. I didn’t want to pull a “cold-turkey” move on her with something that made her feel safe. Just felt wrong to take something away from her when she was so happy with it.

Either way, she is no longer swaddled and she sleeps just fine!! YAY!! It was a journey getting here but also a learning experience.

If you are going through this, just know that there is an end of the tunnel. Don’t give up! They won’t always be swaddled if that is what you’re worried about! PLUS, once they are done being swaddled, you can take naps with them and cuddle!!